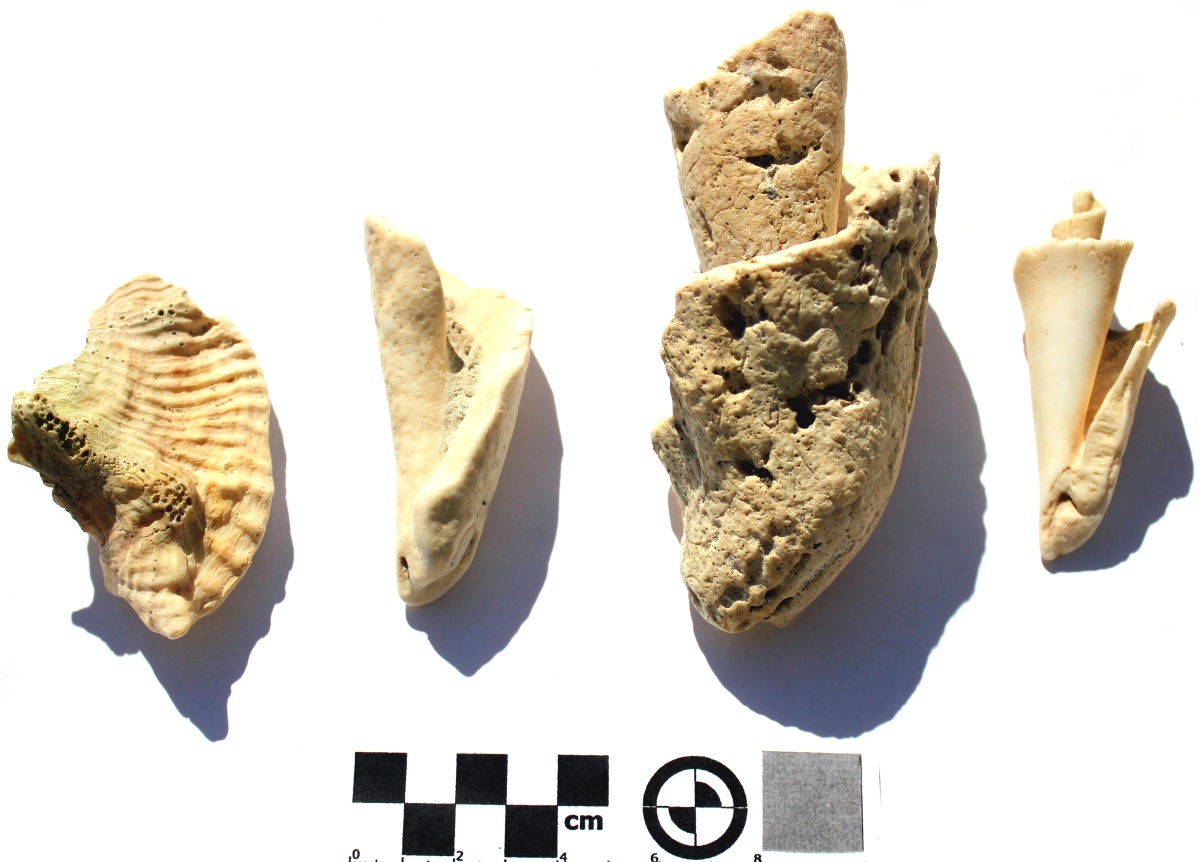 At our Archaeology Roadshow event in Lac La Biche, in fall 2015 Allan and Juanita Gaudreault brought in several conch shell fossils. These shell fossils were heavily worn and most were down to the central spiral. This made them difficult to identify at first. These are very unusual specimens because these type of marine shells are not found in Alberta. They are native to the Gulf of Mexico. Our initial interpretation (as archaeologists, not palaeontologists) was that this could possibly be a discarded souvenir or a fossil from the Cretaceous period when an ancient seaway stretched from the Arctic to the Gulf of Mexico.

Tree Time Services reached out to Alwynne Beaudoin, Curator of Earth Sciences and Quaternary Environments at the Royal Alberta Museum (RAM), for an answer. The RAM had a conch shell, also found in the Lac La Biche region, donated to the museum in 2011. She has been researching this conch shell and “has not been able to find another record of a conch in prehistoric context from Alberta, though there are records of other marine shells (and) they are unlikely to be Cretaceous.”
Furthermore, the specimen in the Royal Alberta collection was radiocarbon dated to “slightly more than 1000 years before present.” That specimen’s age debunks the discarded tourist souvenir theory. The most likely explanation for the RAM’s shell is prehistoric trade from the Caribbean to Alberta 1000 years ago. There are some artifacts found in Southwestern Manitoba, such as this shell gorget, made from a species of shellfish native to the Gulf of Mexico. However, evidence of prehistoric trade networks between the Canadian Plains and the Gulf of Mexico is extremely rare in Alberta and this would be an artifact of significant information potential.

The potential that the 2015 shells represented trade or travel 1000 years ago, rather than palaeontology from millions of years ago, was pretty exciting. On September 7, 2016 Corey Cookson, Project Archaeologist at Tree Time Services, and Christina Barron-Ortiz, Assistant Curator at the Royal Alberta Museum, made the trip up to the Gaudreault’s home to view the rest of their collection. Upon another viewing of the conch fossils it was clear that our first interpretation was right, and these are remains from the Cretaceous period about 65 million years ago. With permission from the Gaudreaults, a representative sample of the shells were taken by Christina Barron-Ortiz for further study. We will post a future blog once we receive confirmation of the age of the shell fossils. Also stay tuned for another post about some other interesting fossils from the Gaudreault collection.

I have been working in cultural heritage management for five years and have also worked in academic institutions. I am a permit-status archaeologist in Alberta but also have extensive experience in British Columbia. I have undertaken all stages of assessment on a variety of site types and for a range of development projects (forestry, rail, roads, and research). In addition to my experience in the field, I have a background in Geographic Information Systems (GIS) which was the main source of analysis for my thesis "An Analysis of Site Selection Behaviours in the Prince Rupert Harbour Area." This is one of the strengths I bring to the Tree Time Services team as I have contributed to the development of archaeological predictive models for our clients. View all posts by Corey Cookson